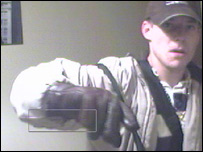 This is really interesting!
A house burglar in the U.K. was caught after a webcam on the owner’s computer recorded images of him carrying out the raid. [news clip]

A home computer has been given the credit for putting a 19-year-old serial burglar behind bars.
Stills of serial raider Benjamin Park, 19, of Cambridge, were sent to an email address so even when he stole the computer, the images could be found.

The burglary – in pictures
And here is a comment from the police:

“It was a pleasure to show him the pictures and see his expression when we interviewed him.”

What is amazing about the incident is that the computer emailed the images even as it was being stolen!
_________
Images Courtesy: BBC