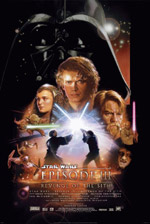 1 thought on “Star Wars: Episode III – Revenge of the Sith”