Watched Munich about 2 weeks back. Wanted to but never got a chance to write about it in my blog. Well, better late than never 🙂 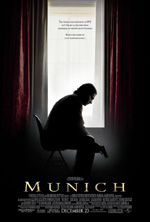 It’s a great movie by Spielberg. Definitely worth watching. The story is about a covert Israeli squad assigned to track down and kill the 11 Palestinians suspected to have planned the attack on the Israeli team at the 1972 Munich Olympics. The nice thing I like about the movie is that Spielberg has treated it with justice. He has not taken any sides.
The following excerpt sums from Rober Ebert’s review sums it up well:

Steven Spielberg’s “Munich” is an act of courage and conscience. The director of “Schindler’s List,” the founder of the Shoah Foundation, the most successful and visible Jew in the world of film, has placed himself between Israel and the Palestinians, looked at decades of terrorism and reprisal, and had one of his characters conclude, “There is no peace at the end of this.” Spielberg’s film has been called an attack on the Palestinians and he has been rebuked as “no friend of Israel.” By not taking sides, he has taken both sides.

One of the main stars in the movie is Eric Bana who starred in “The Hulk” and “Troy”.
Related Links:
– Official Site
– CNN Review
– Rober Ebert’s Review
– Wikipedia
– Yahoo! Movies
Poster Credit: Wikipedia 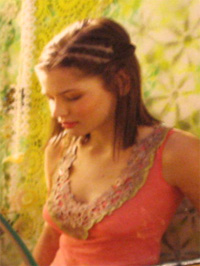 If you have any idea who this girl is, please post a comment or send me an email. You can also view a larger version of the photograph here.
Suggestions till now:
1. Jennifer Garner
2. Michelle Trachtenberg (plays Dawn Summers in “Buffy the Vampire Slayer”)