If you have a Dell computer, you can order 1 (one) copy of your Windows and Driver CDs using the following form.
[1] Dell “Request Backup Discs” form
https://support.dell.com/support/topics/global.aspx/support/dellcare/en/backupcd_form
[2] Reinstall Options
The different reinstall options (System Restore, PC Restore, Manual Restore) are available here:
http://tinyurl.com/restore-reinstall-windows
[3] PC Restore
Note that most newer Dell computers come with feature called “Dell PC Restore”. You can restore the original configuration of your computer from an unmounted partition on the hard drive. Do not forget to BACK UP all your data before you use this option. Details below:
http://tinyurl.com/yph34j
I started getting blue screens on my Dell XPS M1330 yesterday. I spent half a day trying to restore and repair my Windows installation. But I was not able to fix the problem. I could not use the “Dell PC Restore” option because I had not backed up my data yet. I finally fixed the problem by inserting the Windows Vista disc and then choosing the “Repair” option (instead of the “Install” option). That fixed my problems. I then quickly backed up all my important data.

“That O’Brien was to be Leno’s final “Tonight Show” guest, crowning a week that focused on longtime friends, including Leno’s first guest, Billy Crystal; Gov. Arnold Schwarzenegger, who had announced his candidacy on the show and whom Leno has imitated broadly and often; and Gibson, whose ongoing divorce and pregnant girlfriend gave Leno a last Hugh Grant moment: “Can I ask you, what happened?”

Perhaps it is just the performer’s fear that every gig is potentially the last, but Leno — who didn’t take a sick day from his show until this April and who, to the displeasure of the Writers Guild of America, wrote his own monologues when “The Tonight Show” returned to the air during last year’s writers strike — is not about to relax. He’ll be onstage tonight in Atlantic City, N.J., with June dates in Las Vegas and Rancho Mirage. And there is a new show to make.”

To scroll left and right on the Blackberry 8703e, press ALT and the scroll key at the same time. Stop pressing the ALT key when want to scroll up and down.
Note: Not able to scroll left and right would drive me crazy. Couple of months back, I found out the ALT method. Today, I was talking to some other Blackberry users and they did not know about the ALT method. So, I decided to post this to share with others. If this is useful to you, then my time was well spent 🙂 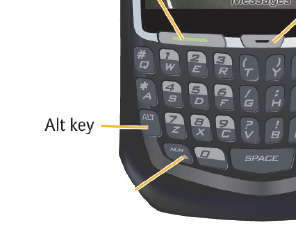