So many changes in the last couple of days. Someone had told me that change is one thing is which is constant in this company and they were right. But change is good, especially the ability to implement changes/requirements from customers and forecasts into your product line. It indicates that the firm is dynamic and constantly growing.
Hope to learn a lot in the next 12 weeks. Learning from the best people in the industry is indeed a great opportunity. 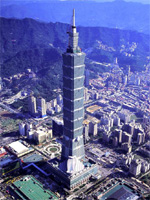 1. Taipei 101, Taiwan: 508 meters
2. Petronas Towers, Malaysia: 452 meters
A comprehensive list is here. It also includes uncompleted buildings.
The Burj Durai, Dubai will be the tallest building in the World (810 meters) when it is completed in 2008 (expected).
One of my classmates from Taiwan says that her dream is to work at Taipei 101 after she completes her MBA.
And did you know that the official name of Taiwan is the “Republic of China” and the official name of China is the “People’s Republic of China”? Interesting.
Photo Courtesy: Emporis http://www.emporis.com/en/il/im/?id=329425

Watched “Mission Impossible III” yesterday. It was great. The action scenes were awesome. I do have to admit that I liked the first one the best. I don’t remember much about part two :). If you are in for a nice action movie, then this movie is definitely recommended. 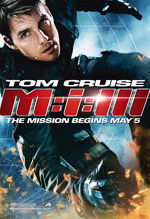 Related Links:
– CNN Review
– Yahoo Movies
– Official Site
Another movie I am looking forward to is “The DaVinci Code” which will be released on May 19th.

I was discussing this with my friends previously but they did not believe it. Then I came across this article today. It is an NY Times editorial which talks about how McDonald’s is starting to implement long-distance call centers for taking orders from drive-thru customers! Some 50 McDonald’s franchises are reportedly testing this remote order-taking technology. So, when you are sitting in your car and giving that order for your McChicken, the person you are talking to might actually be sitting in California instead of good ol’ Knoxville! Think about that.
NY Times (4/13/2006): Fries With That?
NY Times (4/11/2006): The Long-Distance Journey of a Fast-Food Order

Fries With That?
NY Times Editorial. April 13, 2006
Sometimes it’s all too easy to lose perspective in the modern world. On Tuesday, The Times reported that McDonald’s has begun experimenting with a new way of routing menu orders at the drive-through window. The voice you hear at the squawk box comes not from an employee inside the restaurant but from a call center hundreds, if not thousands, of miles away. The order is then relayed to the front of the very restaurant where you are bodily present and filled as usual. A man who wants a Big N’ Tasty in Wyoming and a woman who wants an Egg McMuffin in Honolulu may be placing their orders with the same teenager in California. Several customers, told of the fact, seemed taken aback.
And yet where is the surprise? There you sit, perhaps miles from home, idling in a car that was manufactured almost anywhere, burning gasoline refined from a substance pumped out of the ground who knows where and shipped, in all likelihood, across the ocean to be trucked to the station where you last filled up. Meanwhile you’re talking to your best friend on your cellphone