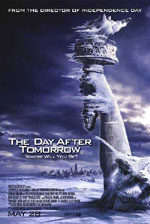 Watched “The Day After Tomorrow” on DVD today. The theatre release was on May 28, 2004 and the DVD release was on Oct 12, 2004. Liked the movie though I guess it would have been much better in the theatre.
Also, read somewhere that the theory proposed in the movie (i.e. the North Atlantic Current failing due to the melting polar ice caps) is actually feasible but it would take a lot of time for it to come into effect (not 7 to 10 days as in the movie).
Have been watching a lot of DVD movies over fall break. Here is a partial list:
– Along Came Polly
– Man On Fire
– Mean Girls
– Paycheck
– The Alamo
– Walking Tall
Links:
– Review at Yahoo Movies
– Review at IMDB
– Official Site
Update (11:13 PM 10/17/2004): Found the article. Here is a quote: